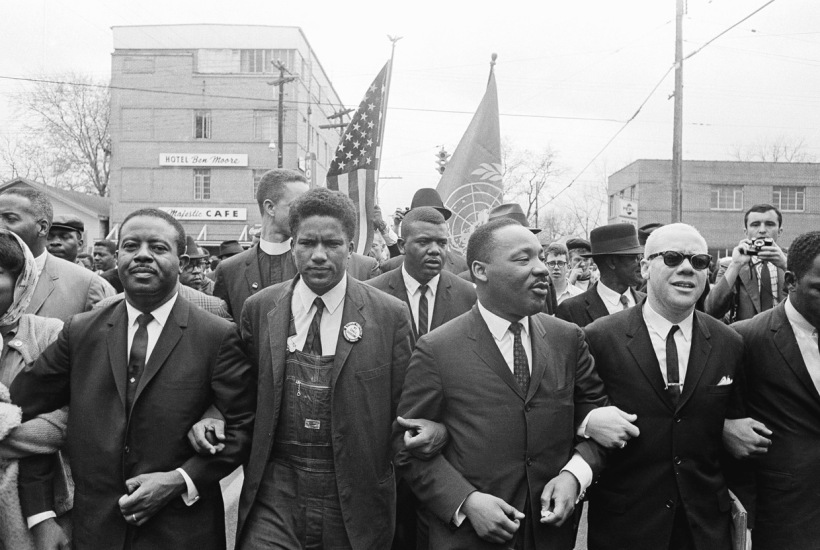 “I’ve Been to the Mountaintop” is the popular name of the last speech delivered by Martin Luther King Jr. King spoke on April 3, 1968, at the Mason Temple in Memphis, Tennessee. On the following day, King was assassinated.

There are moments captured by photography that cause time to stand still. The Marines raising the flag on Mt. Suribachi, the Berlin Wall coming down, the twin towers on that fall day in September…..

This photo taken outside the Montgomery courthouse March 17 1965 is one of those times for me. In a few short years Dr. King would be dead and the rise of black militancy, and white supremacists would replace “the dream” with the negative protests and negative arguments Dr. King spoke against. We have yet to recover from the damage Dr. Kings death brought.

But on that day Rev. Abernathy, James Foreman, Dr. King, Jesse Douglas Sr., and John Lewis stood resolute, courageously, against all that would deny them the right to be free people. Free from injustice, free to pursue the promise of life, liberty, happiness our founders even though flawed themselves envisioned for all citizens of our nation.

A fellow blogger wrote this “We need to die to self to recapture the heart of God for others. It is what He did for us”.

She is correct. Until we are able to love others like ourselves racism, prejudice, injustice and hatred will always find a home. It is up to each of us as followers if Christ to be willing to do so.

Dr. King had a dream that I and many others share. The following are excerpts from his speech given on August 8th 1963 in Washington D.C.

I say to you today, my friends [applause], so even though we face the difficulties of today and tomorrow (Uh-huh), I still have a dream. (Yes) It is a dream deeply rooted in the American dream. (Yes)

I have a dream (Mhm) that one day (Yes) this nation will rise up and live out the true meaning of its creed (Hah): “We hold these truths to be self-evident, that all men are created equal.”

That one day right there in Alabama little black boys and black girls will be able to join hands with little white boys and white girls as sisters and brothers. I have a dream today.

All excerpts from “I’ve been to the mountaintop” and “I have a dream” are copyrighted MLKEC-INP, Martin Luther King, Jr. Estate Collection, In Private Hands

One thought on “I’ve been to the mountaintop…”